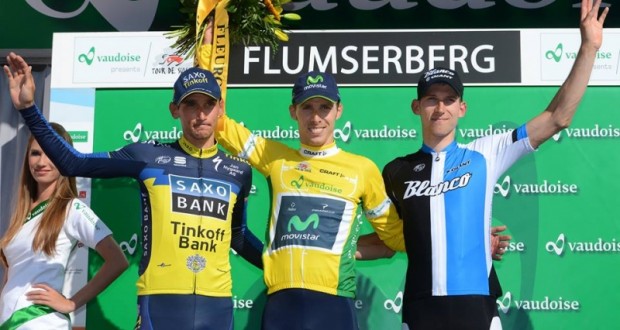 How do you assess your third position?First, I felt disappointed standing on the podium next to two riders who had beaten me. I wanted the victory. But I have to take my hat off to those riders who were better than me. Especially to Costa. He pulled off a great time trial and he even won the queen stage. Mollema finished both today and in the mountainous stages ahead of me so they proved to be in slightly better shape than me.But, it is your best stage race result this year…That´s right. My performance seems steadier than at the beginning of the year. Having finished third at the Tour de Swiss after a long racing break is definitely not bad.Can you tell us the tactics that you used in the time trial?In the morning I went to pre-ride the course. I know the climb from the 2008 edition, I remember tackling that ascent in the rain. This year the funny thing was that we rode 16km on the flat and then we switched the bike and we were up to an uphill 10km stretch with 900m of altitude difference. I knew that I had to start at a steady pace and then gradually increase it. Between 2 and 3km to go it was really steep and without power I would have lost a lot of time.You said that the Tour de Swiss would give a hint about your Tour participation. Do you think it is in the bag now?Aside from Alberto, thirteen riders are on the long list and the management are now going to select the final line-up. I think I should be at the start on Corsica. Are you going to participate in the national championship in Slovakia?I will see how I feel. I will make the decision on Wednesday or Thursday after having talked to the team management. Options still remain open.

2013-06-16
Ondřej Vobora
Previous: Wanted to gain some time, no big deal I didn’t
Next: Roman to skip the national championship