Home » News » San Sebastian? One of my favorites 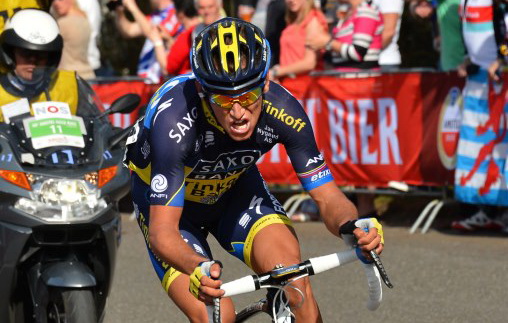 San Sebastian? One of my favorites

“When you ride the Tour, you can be in relatively good form after the race, the question is, how quickly I will get back to the racing rhythm. The body is used to working between four and six hours a day and if you ease off for a couple of days then it is a big blow. That is why you suffer during the first 130km into the race but then when you get back into the rhythm you may find out that you can ride for a solid result,” Roman said. “One usually suffers through the first part of the race. Then a breakaway group generally rides away and the last 60km are really brutal. We have to tackle the Jaizkibel climb twice and then the last ascent that was added to the route some three years ago. The race either ends in a bunch sprint or you have to be lucky choosing  the right breakaway group. The start list is mainly comprised of the riders who raced at the Tour so we all are going to have pretty much the same legs,” Roman added. He hasn’t managed to rest properly after the Tour. “I spent Monday and Tuesday travelling  and didn’t find time to ride my bike. I took an easy ride with Míša on Wednesday morning to spin my legs before the Austrian crit race. With the storm coming they reduced the  race from 64 to 56km but even so it was harder than I had expected. The circuit was 800m long with four corners and after each we had to make an all-out effort. We had the average speed of 44km/h and it was a blow for the body,” revealed Roman who practiced yesterday with his dad for three hours in the Šumava mountains.